Should the PCB stick to it, and get – A Stick? 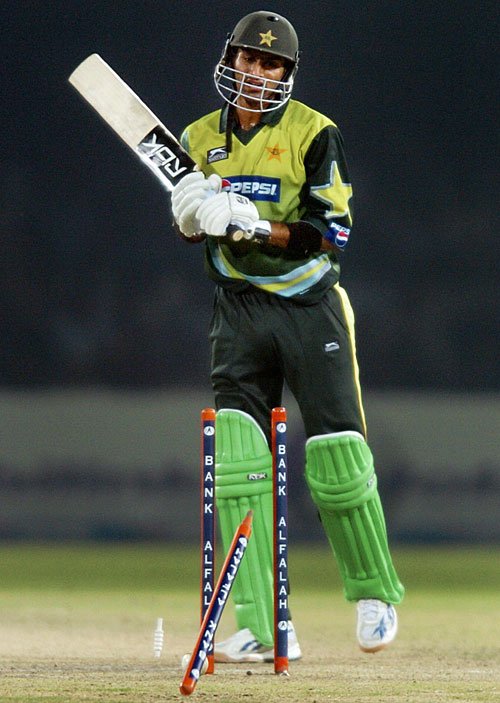 (Article has been composed by CJ Manager Javed A Khan)

Right now there is nothing much going on in terms of cricket, except for England trying to revive their pride against New Zealand or, a few so-called Badshah’s and Wazeer’s struggling in vain. After the Pentagular Tournament in Pakistan, which was the biggest domestic event, it is about time for the PCB to re-think their strategy in sticking with Shoaib Malik to lead the team.

So many sports critics, journalists, former players and not to mention bloggers, readers and cricket fans throughout Pakistan and abroad have expressed the need to remove Shoaib Malik from the leading role and appoint Shahid Afridi as the captain of the team. Whether the PCB officials and selectors would pay any heed towards this view is another story. In Pakistan it is not easy to accept a Captain who is not from Lahore. Mushtaq Mohammad and Asif Iqbal may have lead the team for a while but, not for a long sustainable period of time and Miandad was twice pulled down, humiliated and ridiculed for his captaincy and twice he got the same treatment when he was the coach of the national side.

Malik has proved that he is a very weak leader, in fact, he does not possess the qualities of a leader, he has shown panic and distress when the chips were down. A true leader lifts the morale of his team when the chips are down, whereas, Malik is the first one who cannot hide his feelings and expressions and goes defensive even at the slightest aggression shown by the opposition. He should know that the best defense is aggression. But, his body language on the field demoralizes the whole team and he does not have the ability to lift the morale from an adverse situation and make it into a winning situation.

His recent injuries and reasoning not to play in the crucial matches at international and domestic level has created doubts in the minds of so many people that he loves to escape from his responsibilities and come back later to defend himself with some silly excuses. Like, every time when he lost a match, at the post match comments he tried to cover up his feelings with some silly comments like, “we are professionals and we are in a learning process and we are learning each time.”

People have talked about this in the past and criticized Malik by saying: International level cricket does not mean you are learning, it is not about learning, it is about delivering. You have to perform and deliver, you cannot say, we are learning, then you go back to the school and learn basics. The purpose of this thread is not to ridicule Malik personally, but it is meant to pin point the drawbacks in his personality and that is costing the team too much. If the PCB wants to stick to their decision with the notion that its been scribed in a stone and cannot be changed, or if they change people will laugh at them, is even more silly than not changing the captain when the whole world is demanding for a change.

But, change does not mean you bring in Misbah ul Haq or Salman Butt, because neither of them can justify it better than Shahid Afridi. Because, Misbah, by age may be older than Afridi, but Afridi has more international experience and he has delivered well on so many occasions. Also, as a captain of Karachi, Sindh, HBL and in so many other domestic tournaments Afridi has performed very well. Therefore, he deserves to be given that chance to lead the team. And Salman Butt, we all know has proved that he couldn’t bear the responsibilities of a vice captain, making him a full-fledged captain would be a blunder and a big disaster.

Younus Khan should not mind who the captain of the team is because, twice he has rejected the offer and must put up or shut up and gladly accept the decision of playing under any captain. And Mohammad Yousuf, should be more happy to concentrate on his batting because at his age, he only needs to worry about his batting performance and he should thank his stars for not getting that additional responsibility.

Now, lets see what the CJ bloggers have to say about this thread? The CJ management thinks that this is the hot topic at the moment and it will draw a lot of attention, and may be other blogs will copy this subject or the theme and follow us like a herd of sheep. So, there you go, please feel free to comment and express your views.

(Article has been composed by Javed A Khan)

This entry was posted on March 16, 2008, 10:49 PM and is filed under LS Pakistan. You can follow any responses to this entry through RSS 2.0. You can leave a response, or trackback from your own site.