He came, He saw, He kicked the Butt.

DNA has created a big vacuum – much bigger than Ijaz and Salaman’s Butt – and its hard to fill the void thats been created, even if the Sports Minister, The Law Minister and, the MNA combined together pushed Ijaz Butt out of the contention for the post of the PCB Chairman. And, just look at their faces, do they look like they have the capability or the skills to run a multi-million dollar organization? In my opinion – certainly not !

The Sports Minister of Pakistan

Now, hold on for a second, people might be pulling their guns and drawing their swords from their “side-bottom” on my passing this sweeping statement “just look at their faces.” Yes, I do understand that one should not judge people by their face, but why do they often say: “you judge a book by its cover?” Or, on a similar note in Urdu, we say: “Khat ka mazmoon bhaanp lay tay hain lifafa dekh ker,” which means the same thing that, looks play an important part in judging a person’s character. Otherwise, why would they say “love at first sight?” May be love is blind. But, what about this expression: “A face is the mirror of your mind.” Therefore, faces are important, they tell us a lot about people’s personality and character. Some faces are deceptive but, in most cases it is obvious and a face tells the whole story.

The Law Minister of Pakistan

Most people can differentiate and distinguish between the looks of a paindoo and that of an educated person. The more educated and refined you are the more finesse can be seen in your personality. That is from the way you dress, the way you carry yourself, the way you speak and the way you present your thoughts and express them, it all shows your background, culture, quality, refinement and finesse. 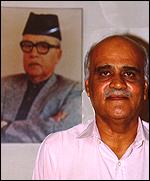 The PPP MNA who wants to be the PCB Chairman - Allah Sayeen Khair karay!

I am not doing any psychoanalysis or character analysis of anyone here. These are my mere observations and whatever little I know about their background it is enough for me to understand that those who were hungry in achieving power have pushed Musharaf out and they came, they saw and they grabbed.

Someone I know was suggesting that the post of the PCB Chairman must be an elected one. By who? Was my question – The people of Pakistan? A big majority of the people of Pakistan – the educated middle class – hardly cast their votes to elect their leaders – they simply don’t participate. Only the uneducated masses or the Mullah types, relgious fundoz, they go for voting and half of them are brainwashed by the crooks and half of them by the Mullahs. So, thats what you see at the top. There is a tussle between the crooks and the Mullahs and certainly the crooks have been dominating. So, the point is if these people cannot elect a genuine leader for the country how can one expect them to elect the PCB Chairman through voting? It is absolutely – “KimPossible.”

What has the Sports Minister done for the promotion of cricket in Pakistan? What has the Law Minister got to do with cricket? Is he going to write the constitution for the PCB? The constitution is missing for the last 60 years, can he just bring it into existence through a magic wand? What about the MNA? Pir Sayeen, can he do anything for cricket? May be he will ask the Sufis, Sants and Bhagts to write a theme for the Disco Diwanay and make them dance on those tunes. Shoaib Malik is already a Bhagat’s Bhagti now, so he is a visionary to go on that mission, anticipating that it is the future.

This entry was posted on August 30, 2008, 2:58 AM and is filed under LS Pakistan. You can follow any responses to this entry through RSS 2.0. You can leave a response, or trackback from your own site.