The retirement decision came too late perhaps, but Kumble executed it at the right moment

Anil Kumble, like many great cricketers, was enigmatic for most of his career. He was a legspinner with an aggression and appetite of a fast bowler. Unlike most legspinners, he was never a great turner of the ball and instead relied more on variation in flight, pace and angle to pick wickets.

Hence, Kumble provided international cricket with a package that was perhaps never seen before- he was tall, aggressive, hungry for wickets and his legspin was unconventional. Yet Kumble was an immensely successful bowler and more than natural ability with the ball or his wrists, it was his combative mindset and sheer intelligence that enabled him to make a name for himself.

Consider Kumble’s technique against Inzamam for instance. Few bowlers troubled Inzamam more than Kumble did and Kumble nearly always succeeded in trapping the legendary batsman before his wickets. Kumble was also gifted in the sense of, pitching the delivery at the exact location where he wanted it to land. It was this continuous meticulous effort of being accurate with the line and length that forced the batsmen to make mistakes against Kumble. In fact at times you almost felt he was a mind reader. 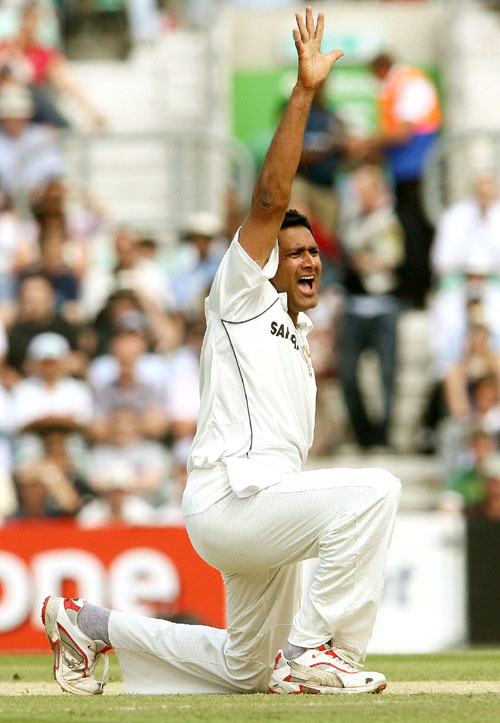 Much like how Tendulkar for most of his career carried the weight of the Indian batting on his shoulders, Kumble was India's trump card when it came to bowling

Kumble never received the appreciation he deserved. His consistency was never in doubt and despite being known in circles as an aggressive and intelligent cricketer, he was considered for captaincy too late; when he had already been playing international cricket for 17 years. Kumble’s record as captain (3 wins, 6 draws and 5 losses) may not seem outstanding, but as a captain he was shrewd and tactful. Perhaps a good way to phrase it is, that Kumble was not particularly bad; Dhoni is just too good.

619 Test wickets at an average of 29.65 and strike rate of 66; somehow one never really saw the value in these figures as the Indian batting maestros Tendulkar, Dravid and Ganguly always stole the limelight. Yet Kumble was very modest and humble and never asked for undue appreciation. We give credit to Tendulkar for being the torch bearer of comtemporary Indian batting mastery, yet we seldom give Kumble credit for being arguably India’s most successful bowler ever; Kumble, with 619 Test wickets, is the 3rd highest wicket taker in Test cricket, after Murali and Warne.

Speaking of Murali and Warne, they were perhaps in a different league to Kumble as their bowling strike rates demonstrate. Yet when it comes to how useful a bowler is for his team, Kumble was never any less than Warne or Kumble. Warne had McGrath by his side and he also had Brett Lee; Kumble, for most of his career, did not play with any world class bowler who could give him support from the other end. In fact, Harbhajan only really came into the limelight when Kumble had already started fading as a world class spinner.

India's unsung matchwinner- all the way.....

Kumble had setbacks and controversies in his career, but he was always picking up wickets and applying pressure on the opposition. Kumble was never very animated, nor was he ever excessively reserved- he applied a balance to his game and he was always up for a challenge. If one considers the ratio of India’s victories to Kumble’s 4 or 5 wicket hauls, one would genuinely discover Kumble’s value to the Indian team.

Anil Kumble will be an icon for his heroic qualities- his mental strength, his resilience but most of all, his modesty and relentless consistency despite being deprived of most of the limelight by Tendulkar, Dravid and Ganguly. The point of being a hero is, believing in a cause and accomplishing it even if if you don’t get your due for it. That is what heroes are made up of, and Kumble was the definitive Indian hero. He retires as a great model for Indian youngsters, and he will be remembered as India’s greatest unsung matchwinner.

This entry was posted on November 2, 2008, 12:11 PM and is filed under LS India. You can follow any responses to this entry through RSS 2.0. You can leave a response, or trackback from your own site.