It would be impossible to list Sourav Ganguly’s achievements and his contributions towards the Indian Cricket Team during his 18 years of international career. But, one must admit this man’s courage, creativity and his craftiness in playing a pivotal role in reviving the lost confidence among the players with his astute leadership qualities. In my opinion his overall or all-round capabilities as a batsman, a bowler and a very good captain makes him stand head and shoulders above the rest of the great players that India has produced.

As a batsman he was a tactician and as a bowler he was crafty and as a captain he was shrewed. Whether people remember it or not, whether they acknowledge this fact or not, when the Indian team was jinxed by Javed Miandad’s sixer in Sharjah they kept on losing against Pakistan for a long, long time. But, it was Sourav Ganguly who came to Pakistan in 2004 and won the ODI and the test series against Pakistan.

In Rome do as the Romans do

Ganguly’s outbursts on and off the field reflects his passion and his emotions for the game of cricket. His batting achievements are not near to Tendulkar’s but they are not mean by any standards. His 11000 plus runs in ODI are third highest. On his test debut he scored a hundred at Lords and not just that he was also known as the spice boy or the hot guy who took off his shirt as a retort to Andrew Flintoff’s earlier stint. Although some of the Indian critics did not appreciate it, but I see there is nothing wrong in giving him a tit for tat.

Like I said, it would be hard, rather impossible to pen down every single detail about Ganguly’s contribution that is why we have dedicated this special thread DADA KAY NAAM – EK PAIGHAM. Now, its for you to write your feelings and observations about him and it is up to you to rate him above or equal to Tendulkar. Be fair and be generous to give him the due that he deserves. 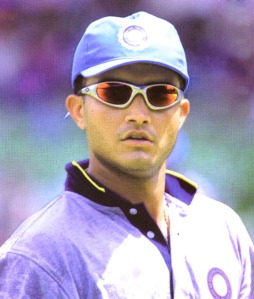 Cool behind those glasses?

Despite being victimized by Greg Chappell and the trivial politics that he played to ouster Ganguly, he came back with an even strong grit and determination to prove his worth as a player. In my opinion he is the most successful and accomplished player India has ever produced.

This entry was posted on November 10, 2008, 6:34 PM and is filed under LS India. You can follow any responses to this entry through RSS 2.0. You can leave a response, or trackback from your own site.