A DAY OF RECKONING

SEPTEMBER 26TH, 2009 will be a day of reckoning for India and Pakistan.

India has always won against Pakistan in all major World Cup tournaments and Younus Khan, the captain of Pakistan team has vowed to break this jinx. 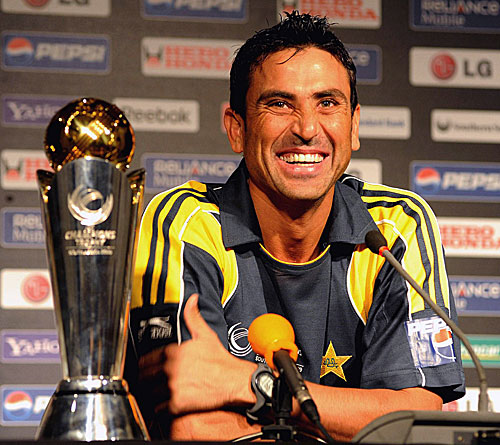 Only A Pathan can be so happy with a broken finger

The team Pakistan appears in very high spirit, especially Younus Khan with a fractured finger claims it as nothing serious, as if it happens every day! And, Indian captain M.S. Dhoni is a wee bit worried about his teams fielding performance otherwise he too is optimistic about his team’s batting performance with Sachin Tendulkar and Dhoni in form.

I am only worried about our fielding otherwise, I am cool

From a realistic perspective India’s bowling is a bit questionable, the day their batsmen fail to deliver India will be on the sidewalk. It is their strong batting line up that helps them in chasing the targets.

And, Pakistan is lacking in consistency on their day they can beat any side in the world and Younus Khan and his deputy Shahid Afridi are eager to play against India and that is why it is a day of reckoning for us.

The question is whether the Pakistani openers will fire and give a good platform for the middle order to play risky shots in the last 10-15 overs? The inclusion of Umar Akmal has given them hopes to achieve their goals. The second question is about Rana and Asif, whether they can mesmerize Tendulkar? In the past both have got him early and then comes the wall i.e., Dravid followed by another one man demolition squad in Yuvraj Singh and not to mention Gambhir who slowly and quietly builds up an innings.

If the Pakistani fast bowlers take 2-3 wickets in the first two power plays then they can contain India under 250 -260 otherwise they can easily build up a 300 plus total on hard and bouncy wickets of SA.

A lot of people are talking about Australia and India in the finals, I would not be surprised if the final is between Australia and South Africa.  And, on big occasions South Africa has always failed like Pakistan has against India. Ricky Ponting’s team is very good and I think they will be my favourites. Obviously I will be very happy if Pakistan lifts the cup but, there are many a slip between the cup and the lip.

Now, the blog is over to you to express your views and your expectations and not to mention – your criticism.  Good Luck.