INDIAN BOWLER MANOJ PRABHAKAR, THE LEADER OF CHEWING THE BALL

Afridi biting the ball but, he is not the first one to bite.

Every single staunch supporter of Shahid Afridi got shocked and embarrassed after the news and seeing Afridi biting the ball. That was a moment of madness and he did that in front of 20 odd cameras, without realizing that he was being focused, in fact some of the cameras are keeping a focus on the ball wherever it goes. Then Afridi not only apologized to everyone but, also added a blunt comment on top of that like, a “Teep Ka Bandh” that all teams do. That enraged many of  his haters and they are demanding to ban him from 5 years to life. Little do they have the knowledge that you cannot be punished twice for the same offense.

As they say, “innocent until proven guilty.” Afridi never denied, he couldn’t have otherwise he would have looked a bigger fool because the proof was right there and he knew that he did that. There is a much better saying in Urdu, which says: “Chor hum sab hain, pakray jayen tab.” Thieves we all are, until we are caught.

Now, look at this video, Indian medium pacer Manoj Prabhakar is caught biting the ball. Check out this video, its not doctored, it is real, the only difference is he was not in focus as Afridi is and Indian players are saints they don’t do anything unfair, they are holier than cow, unlike Pakistanis who are famous for being trouble makers and labeled as cheaters. But, it is right here on this video in black and white or in colour, as you like it:

I was reading on the internet an interview by one of the Indian players called SANDHU, who was critical of Shahid Afridi biting the ball and quoting Imran Khan has taught the whole world how to tamper the ball, as if the whole world were living in stone age and Imran Khan is the torch bearer who brought them the light, especially the Indians who never cheated or tampered the ball. Perhaps Sandhu was not aware of a player called Prabhakar?

Now wait a second, who can imagine a gentleman like Rahul Dravid can tamper the ball? Well it is a known fact that in 2004 in Brisbane he was caught by the TV cameras rubbing a cough lozenges on the shiny side of the white ball and it was reported to Clive Lloyd and he was fined 50% of his match fee. Here is the link:

Not just Rahul Dravid but, Bhagwan Sri Romesh Sachin God Tendulkar was also handed a 75% match fee fine and a one-match suspended sentence by Mike Denness for a similar offense at Port Elizabeth in 2001-02. Since Tendulkar is god and he is above others, his fans, supporters and Indian media tried to hush hush it by saying Tendulkar is innocent, he wasn’t pulling the seam off, he was actually removing pieces of grass stuck to the ball, his only mistake is he should have taken umpire’s permission. Right, Shahid Afridi should have taken umpire’s permission that he is going to bite off a piece of grass from the ball? 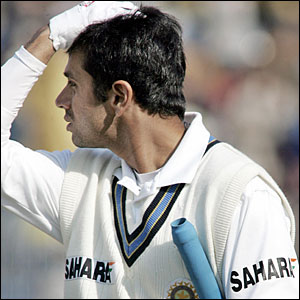 Rahul Dravid - Why did I not eat that darn lozenges instead of rubbing them on the ball?

I had to write this as a retort against some of the Indian Blogs I was reading which are constantly accusing Afridi also, ridiculing Imran Khan, Ramiz Raja and others who have said that ball tampering is not new and Afridi’s case has been blown out of proportion. Therefore, I suggest them to look into their own GIRAYBAAN before accusing others. Since Prabhakar has chewed the ball it was before Afridi’s time it goes to prove that India is the leader, the only difference is they tried to hide the dirt under the carpet and are happy in mudslinging on Pakistan.

Stupid are those Pakistani Senators who are demanding a life ban on Shahid Afridi, it proves that they have no knowledge or any clue about the history of the game and are simply raising their voice to get some attention. Shame on them.

Now, lets turn towards those Gora Saabs or the so called gentlemen who made these rules and are so proud that they are above the law and cannot be punished. Before we come to the recent events lets see how long have they been breaking the law and since when they have been tampering the ball?

Legendary Australian leg spinner Arthur Mailey admitted in his 1958 autobiography, that he kept powdered resin in his pocket and regularly lifted the seam for the quick bowlers during the 1920-21 Ashes series.  See they are so proud of their history. One day Mike Atherton will write a  book and talk about the dirt in his pocket that he used to rough out the ball. John Lever, applied Vaseline on the ball to shine it.

There is long list of controversies related to ball tampering. Some people believe that it is part and parcel of the game. But, the My Baaps of cricket or the politburo called, The ICC has different plans to tackle this dangerous crime. They want to clamp a deterrent against such activity, and for doing this, they have made certain laws. Law 21.3 (The Result): Umpires awarding the match; Law 42.3: Award five penalty runs to batting side and Law 42.1.2: Umpires shall report the incident to the ICC match referee. We all know how Inzamam’s team suffered at the hands of Adolf Hair?

According to the ICC Code of Conduct correctly, ball tampering is a ‘level 2’ offence (Article 2.2.9) complaints can be made by the team officials or the umpires to the Match Referee (article 3.1). The match referee cannot instigate action in such cases (article 3.1.4) I am referring to the recent case of Stuart Broad and Jimmy Anderson’s case where Broad was seen using his spikes to scratch the ball and Jimmy was lifting the seam, both were caught on the camera, but no action was taken because SA did not report and Mahanama’s Roshandan was hapless meaning his hands were tied. Someone needs to register a complaint.

Here is another classic case of reporting and not reporting. In SA when Afridi raised his bat against a spectator who abused him, the matter was not reported by anyone and no one expected that any action would be taken. But, surprise, surprise, surprise one insider of the ICC who must be dying to see Afridi’s back and damage Pakistan’s reputation made a copy of the video and sent it to the Chairman of the ICC Malcolm Speed, who was in the Caribbean and suggested him to ban Afridi for 4 ODI’sand he was banned, that was one of the reasons that Pakistan performed so poorly in that world cup. Had he played against Ireland things would have been different.

It is important to know why they all rub the ball to make it shine on one side and and scuff the other? Basically it is done to make the ball swing. The ICC law is very stupid here, if it allows the bowler and 10 other players to lick it, rub it on the groin, on the thighs, on their hips and, apply saliva to shine it more — is also tampering the ball. The ball is not a coin that one side it is tails and the other side is heads, both sides are equal and same and so must be the law. There cannot be two set of rules besides, this not a rule of thumb but a law that has been made and approved, hence it must be be clear and applicable in all situations. Therefore, people are asking for changing the law, after all it is a man made law and it is not flawless, in fact it is a stupid law and must be changed.

Einstein wasn’t born in Pakistan nor Newton to think about how to reverse swing a cricket ball? The British may have created this game and gained supremacy in the beginning by beating their opponents Australia, West Indies and India.  It was a game of the Lords and then the lords had to play with their slaves and convicts and then, they lost the supremacy as others got better and better. What the Pakistanis discovered to reverse swing the cricket ball is they realized that when one side is smooth and the other is rough it causes a pressure difference between the two sides of the ball. The air pressure depends on the flow of air over each side of the ball.

Normal swing is generated when bowlers, by accident or intent, disrupt the flow of air over one side of the ball by keeping one side of the ball polished smooth and shiny, and delivering the ball with the polished side forward, and the seam angled in the direction of desired swing. As we all know the out swing delivery moves away from the right-handed batsman, while the in swing delivery moves in towards him. Reverse swing is very different from conventional swing.

Although the seam is oriented in the same way as for an outswinger and the action is the same, the rough side of the ball is to the fore, and the ball moves in to the batsman like an inswinger. Reverse swing is achieved when the ball is bowled very fast. In this case the air flow will become turbulent on both sides before it reaches the seam. It was only the Pakistani fast bowlers who realized it first and also had the ability to bowl it fast and accurate. Doosra is also a Pakistani invention when others use this technique they are not as good as the inventors – hence there is and will be a difference between the original and the imitation.

Finally, my point is for those who accuse others, first try to dig out more information more facts and see whether you are justified in accusing others or you are also a culprit and not knowing that you are a culprit and then you are exposed, you look like an idiot. So, follow the rules of a good diplomat who thinks twice before saying nothing. On this blog we support Shahid Afridi a lot, but that does not mean we trust him blindly or consider him a god or some deity we do criticize him and call him Akhroat when he does something stupid.

This time, we were not in a hurry to defend him, we too were shocked at his stupidities but, come to think of it, YES its not a big deal, there are more sinister things that have happened, there are more sinister players in the team who have tried to ruin this game by playing dirty politics, by dividing the team, by deliberately getting out, by way of match fixing for money or for self pride or for the sake of regionalism and personal vendetta, they need more punishment than someone who tampers the ball.

This entry was posted on February 20, 2010, 5:24 AM and is filed under LS Pakistan. You can follow any responses to this entry through RSS 2.0. You can leave a response, or trackback from your own site.