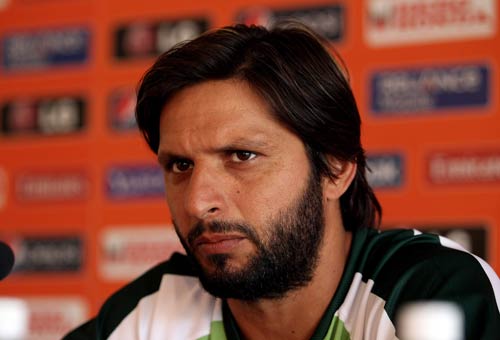 When it comes to leadership, he is serious

The reason Pakistan cricket team’s performance is inconsistent is because, the PCB, its chairman and selectors themselves are incompetently inconsistent and they are a bunch of incapable bureaucrats who do nothing except “wagging their tongue” and Ijaz Butt especially has a forked tongue. Ever since he became the Chairman he has been prevaricating and equivocating his statements, deceiving and telling lies, denying what he has said earlier and then he loves to create uncertainty, suspense, drama and the outcome is always a bad result.

Apart from banning Yousuf and Younus for no reason he is now creating this captaincy issue and turning it into a drama for no reason.  The captaincy issue is the only card that the PCB keeps playing after every series, every tournament, every quarter if not every month.  In good old days, captains were made for a good number of years and the role of leadership is well defined.

If the PCB creates this suspense and drama each time before a tour or a major tournament then, there will always be disunity within the team. The younger players or, those who want to take revenge against others deliberately under perform to make the existing captain a failure. They know that if the team loses, perhaps they will get a chance to step in or get someone in his place who is more dear to them. If this kinda atmosphere is allowed to breed within the team, there will no end to it, because grouping and creating trivial politics within the team is a disaster recipe.  By now we all know that there were groups in the team and a group of players vowed and pledged to ouster Younus Khan from his captaincy by deliberately under-performing and Rana Naveed has confirmed this.

Shoaib Malik is the key figure or, it wouldn’t be wrong to say the father of creating trivial politics within the team especially since he has a history of doing such things at domestic and international level.  At domestic level he himself agreed on losing the match deliberately and was fined, at international level the coach, captain and manager of the team have given their statements in front of the inquiry tribunal that he was like a termite in destroying the team spirit and team unity.

Kamran Akmal dropping Husseys’ catches or missing a run out may not be the result of match fixing or betting but, it is very likely that it is due to the pact or the oath they took to ouster Mohammed Yousuf as a captain.  For this he definitely needs to be penalized and the reason must be given by the PCB instead of denying, delaying or keeping such decisions in pending. It is not good for the player and it is not good for the team.

It is good to see that Salman Butt was batting well after a long time. By appointing him captain it is very likely that he may not perform with the extra burden.  Besides, a player is not a Dolphin or a Whale that needs a treat after every performance.  Now, Salman Butt performed well lets give him the captaincy role.  The PCB is sitting there with a carrot and a stick all the time. They need to give time for the captain to breathe and lead for a few times. You cannot judge a player’s performance from one appearance be it as a bowler, batsman or a captain.

AFRIDI MUST BE THE  CAPTAIN FOR ALL THE THREE FORMATS, IJAZ BUTT MUST STOP PLAYING THIS GAME OF MUSICAL CHAIRS.

This entry was posted on May 23, 2010, 7:55 AM and is filed under LS Pakistan. You can follow any responses to this entry through RSS 2.0. You can leave a response, or trackback from your own site.